To state that there is no such thing as spiritual death for a regenerate man, is to deny the need for biblical revival. If one makes such a statement as this, it is clear that he does not know what revival is. It means, literally, “to make alive again”.
The chart, which was accumulated from the former chapter, contains synonymous terms and phrases to: “revival from spiritual death”. Understanding biblical synonyms of “revival”, and, those who stand in need of it (those who are “spiritually dead”), enlarges the vision of the burden of revival beyond what could be imagined. Please carefully consider the chart below as a rehearsal of the former chapter so that, hopefully, as we move forward, your mind will be prepared to reckon with staggering implications.
Terminology for a Backslider’s Restoration

Men of God from Extra-Biblical Church History
Affirmations that it is “to live again” according to Charles Spurgeon and Martin-Lloyd Jones:
To state that there is no such thing as spiritual death for a regenerate man, is to deny the need for biblical revival. If one makes such a statement as this, it is clear that he does not know what revival is. It means, literally, “to make alive again”. In the dictionary it means: “Return, recall or recovery to life from death or apparent death; as the revival of a drowned person” (Websters 1828). Revival’s closest biblical synonym is the word “quicken”, and according to the dictionary this word means: “make alive, give life” (Strong’s Hebrew and Greek Dictionary). The truth is settled then; we are agreed…I do not know how we could not be agreed. These things stand as overwhelming evidence, hands down. What may trouble you yet is confusion,  specifically the question, “How does a man become ‘spiritually dead’ and then, upon revival he is ‘made alive again’”, and yet, he was indwelt by the Spirit of God the whole time… or did the Spirit of God leave the man and then return to him? My reader, John 15:1-7 expresses in metaphor what happens at revival.
A Metaphorical Representation of Revival A metaphorical representation of how a man can “live again”, and yet at the same time, when he was spiritually dead, he was never utterly void of the Spirit of God, which means that Christ, who indwelt him, never left him.
After a careful read the question is answered here: Christianity in terms of “The Vine and the Branches”. A man standing in need of revival (or spiritual life), and yet, he is indwelt by Christ who is Life, how can this be? While such a man has already been connected to Christ in saving union (i.e. the branch has already been grafted into the Vine of Christ), the man is not abiding in the life-blood, the sap, of which his connection to the Vine freely provides. This means that the sap is not filling and giving life to the branch (like the circulation of a body-part on the human body can be cut off from the blood-flow which gives it life), therefore the branch is fruitless, withering, rotting, and dying. It is no strange thing for a man to look upon a Vineyard (or a Living Tree) to find out and discover all the branches which are now dead. Some attempts to revive the dying branches will be used, or, alas, he will break them off (Rom. 11:17, 22). Even so, looking upon the Living Tree of Christ’s Church there are branches which do wither and die! And as they are recognizable to the eye in physical circumstances, so that a man might break them off of the Living Tree, even so Christ warns us: men who are saved, regenerated, and mystically one with Christ by regeneration can, at present, stand in danger of being irrevocably broken off and cast away from Christ because the branches are not abiding in the salvific Life which has been made freely available by engraftment (James 1:18-25, Heb. 12:1-2, 15), and thus the branches in jeopardy are: branches which were at one time made alive, and they are still able to be made alive again (God knows –Heb.6:3, 2 Tim.2:25-26), but they are presently dead and in need of revival…or else they will become castaways (Rev. 3:1-6).
Correlating Doctrinal Representations
One may state that, it is not possible for a regenerate man to fall into a state of spiritual death, assuming that because he has been made alive at conversion he will always be alive, thus he never needs to be made alive again. However, this reality legitimately exists just as, at conversion, we have been given eyes to see, and yet we can become “blind” (Rev. 3:17); we were made righteous, and yet we can be “wretched” (Rev. 3:17); we have been made rich, and yet we can become “poor” (Rev. 3:17); we have been made to “rejoice with joy unspeakable and full of glory” (1 Pet. 1:8), and yet we can become “miserable” (Rev. 3:17); we have been clothed with the garments of Christ’s righteousness, and yet we can become “naked” (Rev. 3:17), or as it is said in another place, we can become “defiled” in our “garments” (Rev. 3:4-5); we have been made the Lamb’s wife by spiritual betrothal and so, we had a white-“hot”, “first love” for God (Rev. 3:15, 2:4-5), and yet we can become “lukewarm” (Rev. 3:16), double minded (James 4:8), and thus having “left” our “first love” (Rev. 2:4), we become adulterers against Christ our Husband (James 4:4); we have been made the friends of God (James 2:23) which inextricably means, we are enemies of the world, and yet we can forfeit this friendship, and betray it; by a friendship with the world we can become the enemies of God (James 4:4).

At conversion we were given imputed righteousness, but this does not mean we cannot become wicked, for if we do not walk in the Person of that imputation, “The Lord Our Righteousness”, then we will not be righteous in thought, word, and deed.  When we have been made righteous by nature, by walking contrary to that nature we become wicked. Even so, likewise, we have been made alive in Christ, but by walking contrary to that Life we become dead. Therefore present-continuous saving faith after conversion is identifiable by, the saints walking out their God-given nature which is a Person, who also is our salvation – thus we must walk in salvation to be saved! This introduction is, in a few terms, representative of the pastoral burden of revival in the New Testament, but it is undiscoverable by most people because they are unfamiliar with the framework and terms of biblical argumentation.

A Framework of Pastoral Argumentation Representative of the Burden of Revival 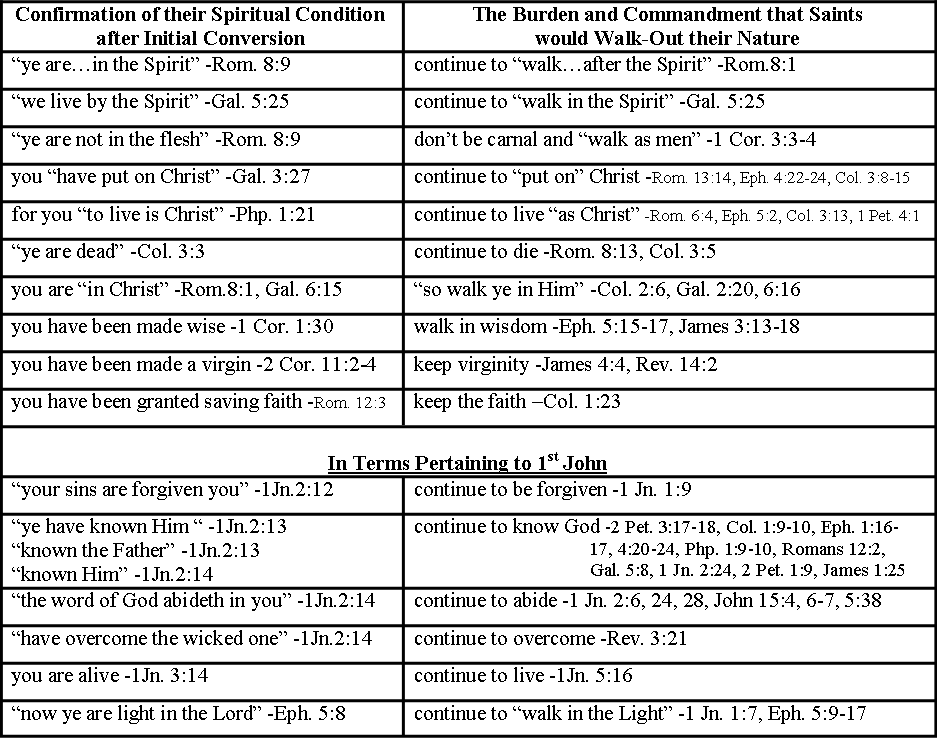 How you walk will determine if you will be God’s recognizable son: a man worthy of God’s name and familial identification. Do you not know that all heaven-born citizens will be of the same language (a spiritual one, Jn. 8:43, 1 Jn. 4:6), race (Gal. 3:29, Col. 3:11), and image (Rom. 8:29)… their Father’s? “For whom He did foreknow, He also did predestinate to be conformed to the Image of His Son” (Rom. 8:29). If we do not walk out the salvific qualities invested within us, we are unworthy to be called by and possessors of the consummating reality which is to come. If we disdain the “first fruits” of heaven’s beginning, we will be unwelcomed for its consummating harvest of unending delight. [For more information on how saving faith is depicted by a walk of worthiness, biblically speaking, see “The NT Gospel Call to Worthiness” (chapter 22, see all sections), and the sermons titled “The Presentation”, “Worthiness”, and “Christian Perfection”.]
Salvation = Present-Continuous Revival
If men will not seek God for the desire of Him, or, if men will not seek revival for the enjoyment of it, the doorway of revival which stands before them is scarcely knocked upon. When revival appears to be a matter of opportunity, a mere choice to gain or lose as an expendable advantage, scarce will men whole-heartily seek it. But when men are awakened to see that they MUST have revival - that it is a matter of LIFE and DEATH! Men will seek after it because they know it is for their life! “What will a man give in exchange for his soul?” If men will not seek revival for the sheer desire of it, they will be compelled to seek it for their desire to live! But if we are deceived to think that “revival” is something else than what scripture affirms it to be, what will become of us? And how will revival ever be obtained? “For we shall all stand before the Judgment Seat of Christ” (Rom. 14:10), Paul said, but what was his great concern?

Paul’s concern is, not for the saints at Rome only but for all saints. Paul’s burden is that we would be worthy to stand before the Son of Man – “the Life” (Jn.14:6) – and be accounted worthy to inherit eternal life, “Because He hath appointed a Day, in the which He will Judge the world in righteousness by that Man whom He hath ordained; whereof He hath given assurance unto all men, in that He hath raised Him from the dead” (Acts 17:31). Christ Jesus is the Man of Life, the Resurrected Life, and all those who walk in Him will not be condemned (Rom. 8:1 see KJV). His work on the cross is that He might live His life in us (Gal. 2:20), and if we are found to be walking in carnality which is death (Rom. 8:6), we will be accounted as lifestyle-apostates (Jude 1:4). God the Father has “committed all judgment unto the Son”, and the truth of the matter is that “the Son quickeneth whom He will” presently and continuously (John 5:21-23), and when we are gathered together before Him on Judgment Day we will be examined based upon this one question – are we ALIVE, QUICKENED, and REVIVED, biblically speaking? The Lord Jesus Christ is He “who shall judge the quick and the dead at His appearing and His Kingdom” (2 Tim. 4:1), are we ready? All men “shall give account to Him that is ready to judge the quick and the dead” (1 Peter 4:5); are we prepared? The Church of Sardis wasn’t but we can be, if we learn from their example: “And unto the angel of the Church of Sardis write; These things saith He that hath the seven Spirits of God, and the seven stars; I know thy works, that thou hast a name that thou livest, and art dead” (Rev. 3:1).
Concluding Lessons
Understanding the interrelationship of revival with “spiritual death” will teach us the following:

When the former situation transpires, the Spirit of God directs the people of God into a head-on confrontation with secondary matters of eternal magnitude which are fulfilled as an overflowing consequence of revival. The foremost attention-gripping principle of revival remains unknown, but the secondary’s are, and the Holy Ghost, using them, moves the people into a position of coming revival. I say again, the foremost consequence of eternal magnitude remains unknown, but the people are compelled to seek God for a revival on behalf of the secondary matters of eternal magnitude which they are aware of and burdened for, and according to God’s sovereignty and timing He condescends to this, in a measure… but never to biblical proportions of revival which is, New Testament Christianity!